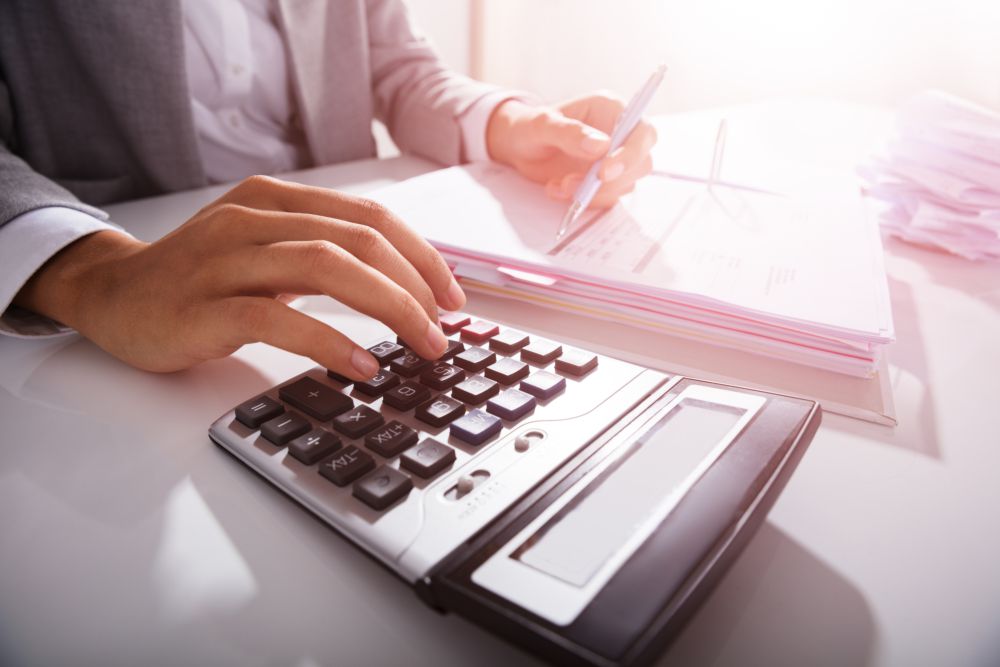 Faced with apprehension, the first Budget Speech of the “new normal’ was generally well-received, with the Rand holding steady, markets reacting positively, and South Africans breathing a collective sigh of short-term relief.

As Finance Minister Tito Mboweni called it, the 2021 Budget fiscal framework is “a sound platform for sustainable growth that creates several reasons for hope”. Find out here what has changed and what it all means for South Africans and small and medium businesses now and in the future.

“Hope is being able to see that there is light despite all of the darkness.”
Archbishop Emeritus Desmond Tutu

It was with a sense of trepidation that South Africans awaited the 2021 Budget Speech by Finance Minister Tito Mboweni.

Reminding South Africans of Archbishop Emeritus Desmond Tutu’s advice that hope is being able to see light despite all the darkness, the Minister presented what has been called a “positive”, “balanced” and “sustainable” framework to address these challenges, announcing some unexpected but welcome short-term tax relief.

The two main stories in the 2021 Budget proposals are the funding of the country’s COVID-19 response and the welcome absence of new and/or higher taxes.

Despite talk of a possible ‘vaccine tax’ and new and increased taxes to fund South Africa’s COVID-19 response – including a massive vaccine roll-out that will save lives and support the economic recovery – no new or increased taxes have been introduced to fund vaccines.

Instead, the majority of funding for new and urgent priorities is provided through reprioritisation and reallocation of existing baselines, budget allocations, emergency withdrawals and – if needed – the contingency reserve.

Government has set aside R19.3 billion to fund Covid-19 vaccines, with more than R10 billion allocated for the purchase and delivery of vaccines over the next two years. The contingency reserve has increased from R5 billion to R12 billion for the further purchase of vaccines and other emergencies.

Let’s look at what will change according to the proposals, and what it all means for us on a practical level…

In addition to the fact that the Budget review proposals included no new taxes nor any increase in personal and company taxes, government has also withdrawn the proposal announced in the October 2020 Medium Term Budget Policy Statement (MTBPS) to introduce tax measures to raise revenue by R40 billion over the next four years.

This is due to improvements in tax revenue collections in recent months, with tax revenue estimates R99.6 billion higher than projected in October, reducing the tax revenue shortfall to R213 billion.

This will provide welcome relief in the coming year as companies are still reeling from the economic devastation of COVID-19.

It is proposed that the corporate income tax rate will be lowered to 27% for companies with years of assessment commencing on or after 1 April 2022. This is a move in the right direction as SA’s corporate income tax rate at 28% is among the highest in the world. According to Treasury, reducing the rate will have “a positive effect on wages and employment, while promoting additional investment”. The Minister also said that consideration will be given to “further rate decreases to make our tax system more attractive”.

However, this will be accompanied by “a broadening of the corporate income tax base by limiting interest deductions and assessed losses”.

Government is aiming to reduce the personal income tax rate over time by increasing the tax base through focusing on economic growth which will trigger job creation.

Higher “sin” and other indirect taxes

Unsurprisingly, the excise duties on alcohol and tobacco products were increased by 8% with immediate effect. It means a 750ml bottle of wine will cost an extra 26c while the price of a bottle of 750 ml spirits has increased by R5.50, and a packet of 20 cigarettes will be R1.39 more expensive. Excise duty on electronic nicotine and non-nicotine delivery systems are to be introduced later this year – following public consultations.

An additional spending allocation to SARS of R3 billion over the medium term has been requested to fund tax collection efforts. As the Minister warned in his speech: “SARS has started to deepen its technology, data and machine learning capability. It is also expanding specialised audit and investigative skills in the tax and customs areas to renew its focus on the abuse of transfer pricing, tax base erosion and tax crime. In this coming fiscal year, SARS will establish a dedicated unit to improve compliance of individuals with wealth and complex financial arrangements. This first group of taxpayers have been identified and will receive communication during April 2021.”

This means that taxpayers with complex financial arrangements should engage a tax specialist to assist them in preparing and/or reviewing their tax returns prior to submission. Similarly, where SARS have selected a taxpayer for verification or audit, or where penalties and interest have already been imposed and levied, taxpayers will need expert assistance.

Have a look at the Tax Tables and Calculators below for more on how this will all impact on you and your business.

Individuals and Special Trusts will see some relief from the Budget 2021 proposals, and to help you quantify that, and as a convenient reminder of the various other taxes that remain unchanged, we share both the official SARS Tax Tables and a link to Fin 24’s Budget Calculator (just follow the four-step process to do your own calculation).

Click on the links below each Table for the full SARS “Budget Tax Guide 2021”.

How much will you be paying in income tax, petrol and sin taxes? Use Fin 24’s four-step Budget Calculator here to find out.

Have a look at the tax tables below for the new Individual and Special Trust income tax brackets, and for a convenient reminder of the various other taxes that remain unchanged – 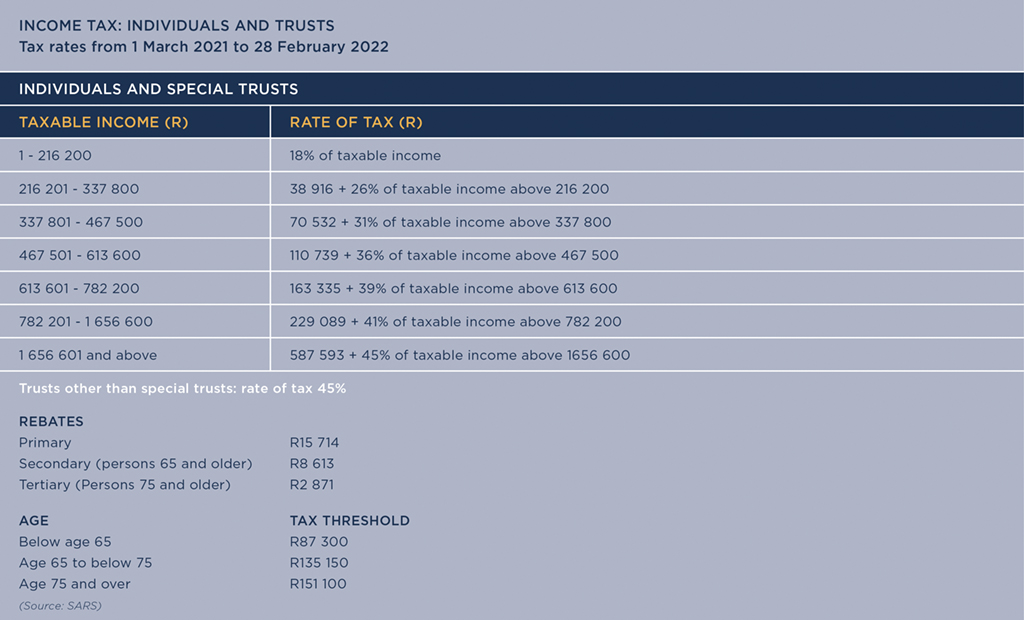